On 06/20/2019, units from the Norco Special Enforcement Team were looking for a known car thief suspect, and who had felony warrants. They located the suspect in a stolen vehicle on the 7400 block of Morning Hills, Eastvale. The suspect and a female passenger fled from the car, and a foot pursuit ensued. Additional resources were called in to help contain the suspects. The female passenger, identified as Heather Botts, 31-year-old, white female, Transient from Norco, that was in the stolen vehicle was located in the containment area and was arrested for felony warrants. The male suspect was searched for with helicopters, the SWAT Team and K9 units but was not located. With video surveillance footage provided by residents in the neighborhood, the male suspect was identified as Nathan Seegrist, 21-year-old, white male, transient form Norco. Charges will be filed for 10851 CVC, Stolen Vehicle and a warrant sought for his arrest. 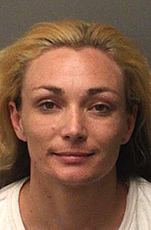 Anyone with information on this case is encouraged to call Deputy Faucher at the Norco Sheriff’s Station by calling (951)270-5673.