On Thursday, April 18, 2019, Eastvale deputies responded to the 7000 block of Archibald Avenue, in the City of Eastvale, to investigate a possible kidnapping.  A concerned resident called to report a female locked in the cargo area of a U-Haul box truck.

Deputies stopped the vehicle and detained five occupants, some of which were hiding in the cargo area of the truck. The kidnap report was unfounded; however, deputies located several items inside the truck, to include a credit card skimmer, checks, numerous fraudulent identification cards, credit cards and gift cards, indicating the truck was being used as a mobile credit card fraud and identity theft laboratory.  In addition, deputies located a loaded .40 caliber gun and methamphetamine.

The driver, Mario Gomez (age 42), was arrested for credit card fraud, identity theft, possession of a loaded firearm while being under the influence of an illicit drug, and possession of methamphetamine. 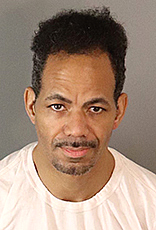 Deputies are actively searching for potential identity theft and credit card fraud victims based on this investigation. Anyone with further information is encouraged to contact Deputy Nuño #3683 from the Jurupa Valley Sheriff’s Station at (951) 955-2600.